The Two Americas: This is Either Your America or a Foreign Land

I don’t know many “desi” folks here. Actually, Saathee’s editor and his family may be the only desi folks I’ve been in touch with since my graduate school days 35 years ago. I am just alive in middle America.

Mine is a quiet neighborhood where the doors are never locked. Neighbors just walk in and share food, bring vegetables from their summer gardens until way into deep autumn, and then the exchange of holiday treats starts. A tree falls in the yard and everyone shows up to help.

It’s a friendly world in a place that overseas folks think is a racist South. I have encountered prejudice here occasionally over the past 43 years, but I don’t live my life with hatred in my heart. People have treated me with love and compassion for the most part.

So, when my nephew (some folks here say second cousin because he is my cousin’s son) Mustafa (Musti for short), arrived from the West coast after landing here from Pakistan to look at graduate school programs, I was at a loss for how to show him America.

He had gotten his undergrad in Southeast Asia and was now exploring options for a literature program that could accommodate his unique angle on the post-colonial world that is Asia. 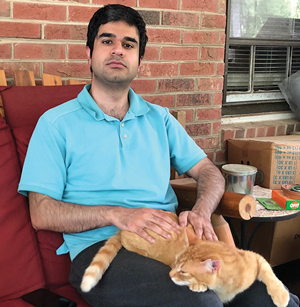 But something I have discussed with cousins on the West coast over the years came alive again when Musti was sitting here with my cat napping on his lap in suburbia. These cousins have PhDs in engineering or work for Fortune 50 companies as senior managers. But they have mentioned over the years that they chose neighborhoods and locales according to the ethnic mix there. Someone like me who hardly hung out with desi people, or never dated desi women was puzzled by that.

A third party like Musti coming through unexpectedly got me to thinking in more of an existential manner on the phenomenon. Immigrants have poured into this melting pot for centuries now, and perhaps the first generation cowered under the intimidating aspects of being newbies in a culture dominated by English-centric norms and religion. But despite the Irish, the Italian, the Chinese enclaves in larger cities, the second generations somehow walked away to fit into America – or at least fight to fit into a resistant America.

Today, we have India Festivals; the Greeks bring us into their culture with events but continue to maintain a sense of ethnic pride. Lots of us are bilingual. We now have Bollywood dancing at white weddings here and in Europe. Everyone loves Indian and Greek food.

We can’t breathe without pizza, and the whole country parties at St. Patrick’s Day.

It was the peak of election season and I was working 18 hour days but felt pressured to take my tired 62-year-old bones out of bed and share some pearls of wisdom with Musti. The problem is I didn’t have any pearls. I was just breathing here, and no one was bothering me. Maybe that was the message. Toward the end of the visit, we spent some late nights talking while I poured myself some wine. The issue is that I have never seen myself any differently than anyone else in this country.

“You land here on the defensive and you’ll live your entire life on the defensive. Remember, this is a post-colonial world,” I said. “Grab the bull by the horns, son. You are probably smarter than most people around you.” I don’t know if it registered, but he is a polite kid and shook his head affirmatively. But truthfully, growing up with my father’s UN diplomatic job, I completely lost track of what skin color, or height, or accents were. If someone said, “Is he the black guy?” I would say, “I don’t remember” – and I really did not. I had met a heart surgeon at a party. He was really smart and that was beautiful to me as a student of humanity.

I think Musti kind of understood. I have spent my life traveling through countries attending Buddhist, Hindu, Jewish, Christian, and of course, Islamic events. I’m not religious, but I show up to celebrate joy, or sorrow, with fellow humans, because my religion is just humanity. If someone prays for me, I bow to them and accept prayers. I respect all gods.

So, with a busy work schedule, I embarked on a mission to just show Musti some real America. We went to a 90-year-old couple’s house to celebrate their dog’s birthday. We went to a contemporary Easter church service. We went for a chili dog lunch, we went to a typical American pub to have a burger, we went way out of town to a Carolina BBQ joint full of country folks to experience a deeper America. And of course, we went to a 7-course meal at the house of my daughter’s gay friend. Yes, I did try to sell him on North Carolina colleges by taking him to UNC-Charlotte, where I walked around shirtless for an hour. “Well, I was shirtless here for 7 years. This is home,” I said. The kid is 24 and felt awkward.

Yes, you have to live with confidence, or you become a slave to your complexes. This is either your America or it is a foreign land. Musti texted me a few days later. It was the Eid festival at his uncle’s house with people in desi clothing and with desi food. “That’s also an America,” I said. “I did the best to show you mine. Maybe you’ll decide on North Carolina for grad school, so I won’t hit the cold dirt alone here.”

“Thank you,” he said. “I am weighing all options.” When you weigh options, I mostly lose. But I’ll be here in America if someone wants to visit.

Ahsen Jillani a former editor and publisher, is originally from Islamabad, Pakistan, and now lives in Mint Hill. He owns Must Media, a PR firm focused on political and corporate clients.
Contact: aj@must-media.com