The Last of Us: From Monumental Game to the Screen

Home » The Last of Us: From Monumental Game to the Screen
Categories: Mirror Mirror 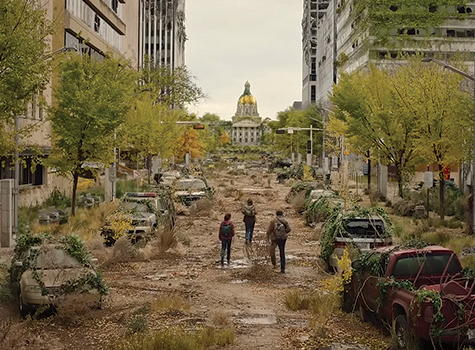 It was 2013… well before the people of the world had any thoughts about a global virus outbreak beyond the realms of fantasy or science-fiction. Naughty Dog, a video game developer known at the time for the Indiana-Jonesish adventure series Uncharted took a chance with a new game concept: blending a post-apocalyptic survival story with a touching surrogate father-daughter tale. Oh, and there’s also zombies. Lots and lots of zombies.

On their own, none of these ideas are especially unique. In fact, the game does delve into themes taken from other titles such as The Walking Dead, Children of Men, and The Road. However, writer/director Neil Druckmann incorporated two special details that were nearly unprecedented at the time.

For one, the zombie outbreak itself is based on a real phenomenon. There is a parasitic fungus known as Cordyceps which currently has 600 known strains. The most notable one used as basis for the story is Ophiocordyceps unilateralis which primarily infects ants. Imagine the soothing voice of Sir David Attenborough narrating a scene where you watch the fungus take over the insect’s brain and eventually its body in order for it to spread spores to other ants and continue the cycle. It’s terrifying yet mesmerizing to watch, especially with a victim that isn’t human.

In our new world where Covid is still very much a threat, the concept of Cordyceps suddenly turning to people to evolve is not all that farfetched as we once thought.

The other innovative choice Druckmann made is to exclusively use motion-capture for each of the characters. It seems so commonplace now in all sorts of media, but in 2011-2012 it was nearly unheard of for a video game. And while the characters themselves were physically rendered through the use of face and body models, all of their motions and voices were recorded by the actors themselves to offer more authentic performances.

“…every time you split up the performance in any way, you lose some of that magic where they did a gesture or they delivered a line a certain way. And those things have to be in sync or there’s just something subconscious that’s just off putting about the performance,” the creator explained in a behind the scenes interview about the game.

This second distinction is especially apparent with one iconic scene during the opening of the game involving Joel, one of two main protagonists, and his daughter Sarah. By using motion-capture to capture such authentic performances, we as players get to experience the fear and heartbreak in both character’s eyes. Troy Baker (Joel) and Hana Hayes (Sarah) had to perform this scene multiple times and were emotionally wrecked after each take.

And now, 10 years later that very scene plays out faithfully in life action during the first episode with Pedro Pascal and Nico Parker portraying Joel and Sarah respectively. The tension is there. The emotional depth is still present. Whether you’re a fan of the game (like myself) looking for every little homage, reference, and direct adaptation present in every scene or watching the show with fresh eyes, that scene still creates buckets of tears.

In a world full of notoriously terrible game to screen adaptations, this show offers a unique ideal. More often than not, video games aren’t created with linear stories in mind. So attempting to shift a branching narrative into a focused one is an immense, if not impossible task. The Last of Us, on the other hand, is a game with a rich storyline that follows a relatively straightforward path. If it weren’t for the various combat sequences, the extremely detailed cutscenes make the player feel immersed in their own movie experience.

At the same time, cinematic storytelling can accomplish techniques a video game simply can’t convey. On screen, characters are motivated by actions, conflicts, and emotions that seldom get shown through game protagonists. Luckily this TV adaptation co-created by Druckmann and Craig Mazin, the mind behind the Chernobyl miniseries, seem to have split the difference.

The game’s world was initially designed to make players feel like they’d walked into a film during a zombie apocalypse: The show, allows for more in depth characterization which couldn’t be shown between shooting things and sneaking around in game play.

The pilot puts more emphasis on Joel and Sarah’s relationship as it spends a whole day with them on the former’s birthday, September 26, 2003; the very same day the pandemic breaks out. The tension is much more dramatic as small hints of what’s about to come are shown in the background through Sarah’s various daily tasks. One particular scene made me absolutely shudder as a neighbor’s catatonic mother behind Sarah’s back begins writhing uncontrollably in her wheelchair, and then emits a muted scream as the Cordyceps take control.

The pilot opens with a flashback to a talk show in 1968 featuring a pair of epidemiologists. One warns that humanity is at great risk from a pandemic caused by a flu-like virus. The other scoffs, explaining that the real threat is not bacteria, but a fungus which controls its victims by flooding their brains with hallucinogens and turning them into “billions of puppets with poisoned minds,” he says, “with one unifying goal… to spread the infection to every last human alive.” The show’s host interrupts with a series of jabs about LSD, but the scientist is deadly serious. All it would take is just a few degrees of global warming to encourage the fungus to jump from insects to larger creatures like humans.

“So if that happens?” the host asks.

“We lose,” the scientist answers with a curt nod.

The show eventually jumps to 2023, but in an alternate post-apocalyptic landscape. The world of The Last of Us is one beseeched by mortality, fascism, sadism, fanaticism, and paranoia. The survivors have been separated into towns under strict martial law to keep them from being infected. A separatist group known as the “Fireflies” have taken up the cause to find a cure and save humanity at any cost.

We meet their leader Marlene (portrayed by Merle Danbridge who also provided the voice and motion capture for her in the game) who is harboring a teenager girl named Ellie (Bella Ramsey). Joel and his partner Tess (Anna Torv) are tasked by Marlene to deliver Ellie to a Firefly safe house in a secure location outside the city.

And so begins a cross-country journey where at its emotional core a middle-aged man and a teenage girl develop a remarkable relationship that slowly progresses in a very human way. And while the story is not unique in concept, the fact it’s narrative can ultimately work in a visual medium may be just what we need in our current pandemic-laden reality.

At last, we can all experience a game adaptation that stands alone as a great live-action TV show which will appeal to skeptical gamers and those casual viewers latching on to the “next best thing in TV.” Both the game and the show are not for everyone, as they depict disturbing violence and language. If you don’t mind that, they’re bound to bring all your emotions to bear as we follow along with two characters brought to life and into our hearts.

The Last of Us series is currently showing on HBO & HBO Max.

Jennifer Allen works at Saathee and is also a Blogger, Photographer, Graphic Artist, Gamer, Martial Arts Practitioner, and an all around Pop Culture Geek. You can reach her at [email protected].