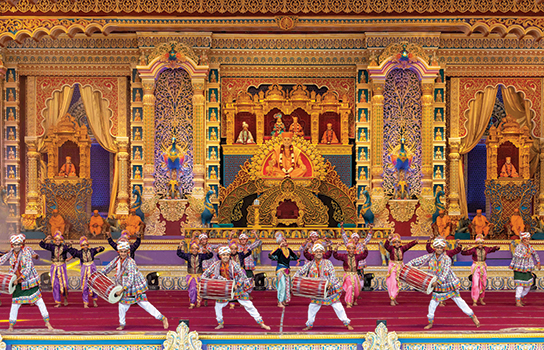 A blood donation drive was also organized over the month-long festival, during which over 5.6 million cc of blood was donated. Hundreds of thousands of people were impressed and humbled by the ornate main gate, Pramukh Swami Maharaj’s 30-foot sculpted image, the replica of Swaminarayan Akshardham, the enchanting glow garden, the light and sound show, the Women’s Empowerment Pavilion and other exhibitions. After visiting the exhibitions, many were inspired to give up addictions and strive for family harmony. After watching the shows at the Bal Nagari, 250,000 children resolved to respect their parents, study sincerely, and become ideal citizens of the world. Over 80,000 volunteers worked to make this happen.

The Grand Finale Ceremony of Pramukh Swami Maharaj’s Centenary Celebrations, was titled, “We Will Not Forget You.” The assembly began with the singing of devotional hymns followed by the grand entrance of His Holiness Mahant Swami Maharaj on a decorated chariot. Youths danced on stage to welcome Mahant Swami Maharaj.

Many speakers noted how Pramukh Swami inspired many temples around the world how he helped changed society by inspiring volunteers, encouraged skill development, and inspired positive change, transforming society through celebrations.

The centennial celebrations were officially concluded with a mass maha-arti, a colorful dance by youths and fireworks.

The BAPS Swaminarayan Sanstha is a spiritual, volunteer-driven organization dedicated to improving society through individual growth by fostering the Hindu ideals of faith, unity, and selfless service. Its worldwide network of 3,800 centers supports these character-building activities.

For more information, photos and videos about the celebrations, visit psm100.org.