Comedians at War Round 3: Roast Battle 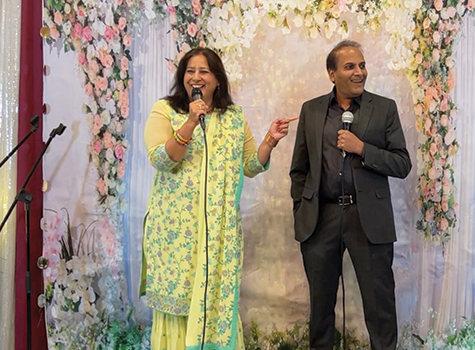 We are off to a new year again. A new year is the time for making new resolutions that we can break after a couple of months and feel guilty for the next six months. One of my resolutions for the new year is to be able to do a stand-up duo set with my wife at a comedy club. As I have mentioned before, I got my wife into comedy. As a bania, it was a strategic decision. Instead of paying a marriage therapist, I thought we could let the audience pay us to listen to our problems. But such business plans come with challenges.

In 2022, we were asked by our Indian friends to do a comedy set at their 25th wedding anniversary. Our pride didn’t allow us to say no, so we agreed. It was actually a great success. Later we analyzed the main reason why it worked so well. Since we had such a traumatic experience performing together at an open mike five years ago, we decided to prepare for our sets individually and decided to improvise on the fly. The lack of preparation and being able to riff on the fly using our existing jokes worked very well at the wedding anniversary event.

A couple of months after that, we were asked by another friend to perform at her son’s wedding at the ladies sangeet. Since the wedding was going to take place in Los Angeles and she gave us a three-month advance notice, we couldn’t find any excuse not to do a duo. So, we set some ground rules and got to work.

At the event, my wife started out making fun of us; how we are not exactly the model couple the newly wedded bride and groom should look up to. We did offer some money savings tips if they ever ran into any marital conflicts. Rather than paying for marriage counseling, they were welcome to utilize our outsource couple in India to fight on their behalf with an additional 30 percent discount for the next five years. That was our wedding gift to them!

Then we gave a little bit about our background and how we had been doing comedy individually for several years. I confessed that when some people approached us to do an act together, I didn’t think it was a good idea. “If I get a divorce, I’ll lose half my jokes.” However, my wife insisted, “But I have so many good jokes about you.”

I told the audience many people think Indian men are arrogant because we walk in front of our wives. They don’t understand that we come from an agricultural society. When we protect our wives from bull crap, we literally mean it. At that point, my wife said, “Oh, thank you for laying your jacket down.” I replied, “I didn’t. I laid your jacket down.” We got good laughter, mostly from men this time.

My wife offered advice to the new bride about how she faced a difficult situation when she suspected that her maid stole her Coach purse and how to keep the maid motivated, she got four more purses. I chimed in it was my idea and the purses were fake and were bought at a fraction of the price from Chinatown.

I countered back saying that my wife was learning French using an app so she could insult me in a whole different language. She explained, “I have to, English does not have enough words to describe your idiosyncrasies.” I confessed to the audience that I was not sure how she was insulting me, but she keeps saying, “Pardon my French.” The audience were engaged. They seemed to be laughing more if I was the victim of the joke.

I mentioned how I learned about a weird medical diagnosis. Apparently, you can develop facial muscle fatigue if you smile too much. I told the audience that some people don’t have to worry about it. Like my wife. We got some laughs from men, but women seemed to be grunting. At that point, my wife smiled. I wasn’t sure if she smiled to prove me wrong or was smiling about her upcoming joke.

She made fun of me saying how I was so absent minded that once I bought a book on how to organize and I lost it. I told the audience that she had lived in the US for over 30 years, and she was Americanized. But instead of saying, “Oh, My God,” she says, “Oh, my Gods!”

She mentioned how developing material together is challenging. While preparing for our set I told her that I would take out all the jokes that didn’t work earlier. She said, “So what are you going to do? Just stare at me for five minutes.” Then she poked fun at me saying that the last time she asked me if I took the trash out, I said, “Yes.” She said, “But you left all your jokes here.”

We had a few more jokes about arranged marriage and my cheapness. Then we reminded the audience that doing a duo was so challenging. We told them that in preparation for our set, we started out as a duo at an open mike show in Los Angeles. Then we had an argument and broke up. Luckily, it was on stage! The audience roared in laughter. If both of us were the target of the joke, they seemed to relish it even more.

In the end, our duo set at the sangeet was a great success. The audience laughed because not only did we have some good jokes, but we also followed some ground rules. We alternated the victim’s choice between my wife and me. Also, contrary to real married life, we kept score, ensuring that she had a higher score at the end. That meant that I was the “butt of the joke” more often than her. We also made sure she had the last laugh. She delivered the last joke telling the audience that in some normal households they have dinner. In our household, we call it a roast battle!

I hope this year we will be able to do our roast battle at some premier comedy clubs in Los Angeles. And that is a new year resolution, I hope to keep. Oops, we hope to keep!