529 Plans are Investments for Education

Are You Doing the Right Kind of Investments?

Most families have the right idea, namely they wish to put some money away for the education of their children; either 100 percent of their undergrad education or a part of it. Some have even supported them for advanced studies, too. There are also some parents who take the attitude that after the secondary education, the children are on their own and they will have to support themselves especially if they wish to go for higher education.

Investing in a 529 Plan has been a common vehicle to support college education; I have known many families who have started saving money for the education of the child as soon as the child is born. This way they get anywhere between 18 to 22 years to keep contributing and helping the money to grow over the long period. Parents can also start investing in 529 Plans even before the child is born, that way getting even more time for the money to grow. 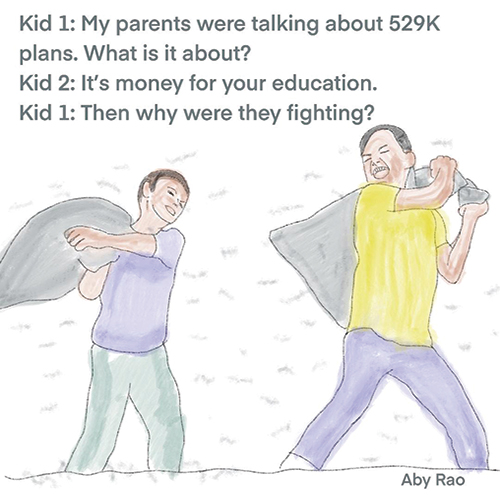 529 Plans are specific for each state even though there are laws at both federal and state levels that need to be followed. These plans exist in each state and sure enough they have a little different flavor added to their plans to make it state specific. A clear and obvious difference one would notice immediately is the tax deduction allowed by the state laws if you are investing in their plans. There is a limit on how much can be claimed for the income reduction purposes which is around $10,000 which is less than the maximum that can be invested for each student every year by one owner. I should note that state income taxes are not that high, percentage wise, to make a big influence on your decision making.

More than 30 states, across the nation, offer their own income tax breaks to 529 savers – though a majority restrict such generosity to residents who opt for their local plans over another state’s. Which means they must invest in whatever investment options that are offered by that state. Herein lies the first rub: they give a tax break but restrict you down to investing in that state’s plans only.

Below is a review of the critical questions, strategies and tax planning moves you will need to know and consider to wade through the myriad options offered by all 50 states and carefully consider whether to take the state tax-break or opt for better plans out of state.

At the last count, 34 states and Washington, DC offer tax deduction or credit for sticking with their state’s option; only seven of those states offer tax parity meaning that residents can take the break no matter where they invest and they are: Arizona, Arkansas, Kansas, Minnesota, Missouri, Montana and Pennsylvania.

As you may well know, nine states do not have any income tax and hence cannot offer tax breaks for such saving: they include Alaska, Florida, Nevada, New Hampshire, South Dakota, Tennessee, Texas, Washington, and Wyoming.

And finally, this might be of interest: seven states have 529 Plans but offer no tax benefits despite levying state income taxes: California, Delaware, Hawaii, Kentucky, Maine, New Jersey, and North Carolina.

If your state has a tax parity, then you must look at those plans first; otherwise, you will have to visit plans from other states to evaluate what they offer.

State income taxes are in low numbers, generally, except for California and some states on the East Coast. State income taxes also need to be reviewed in conjunction with that state’s city, county, sales, property, estate, or inheritance taxes among other things. Even if you ignore these other taxes, the comparison has to be made between how much you are saving in income taxes (if you invest in-state) as against how much extra growth you may get if you invest in a good plan out of state. I should note that if your state does not have a good plan but has tax benefit then invest just enough to get the tax benefits and for the rest go outside the state.

When it comes to what each state offers in its 529 Plan, there are very many restrictions. It is not a case of having literally thousands of different choices like one would have if you were opening a self-directed taxable account. Not only does each state have its own plans, but the choice is limited to not more than four or five different choices; also self-managing your own money like you would do with an IRA is not an option. You must work with what is offered, which is not much.

The first choice to be made when investing is whether you wish to go for in-state fixed tuition fee option that will pay for the child when he/she goes to college in that state or general fund where you can use the money at then current tuition level for any school. If the parents want to send the child for in-state schooling, then it is the first choice. You do get the tuition amount frozen but then the child must be in-state and cannot go in any other out of state school.

The state plans not only offer fewer options for the 529 investors, but their fees are also rather high compared to what you would pay if you were investing in the similar plans, say, in other non 529 plans. The reason for higher fees is simple; it is that there is another body or organization, in the middle, managing the whole 529 show for the state. So, it is imperative that you should pick a plan where you are getting the highest estimated returns over the long period.

Mo Vidwans is an independent, board certified financial planner. For details visit, VidwansFinancial.com, call 984-888-0355 or write to: [email protected]